Can you imagine being awake during brain surgery?

Two very brave patients – Charlie and Zac – did just that, staying awake and chatting through surgeries with Wirginia Maixner and neurologist Simon Harvey. Scroll through the photos and story from @RCHMelbourne to read their story. 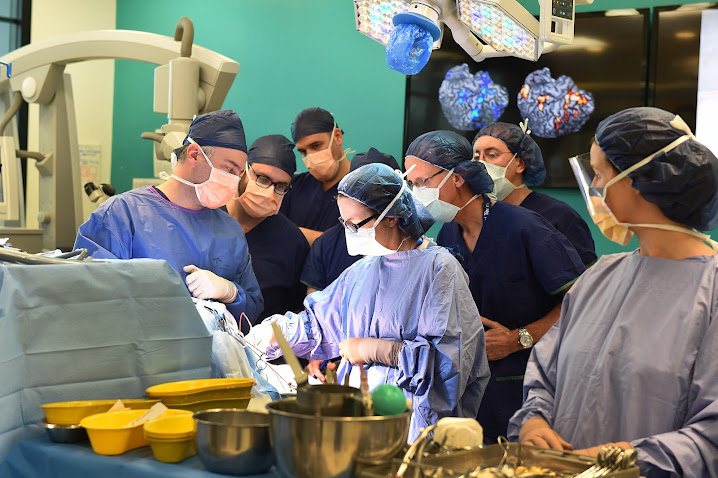 Neurosurgeon Wirginia Maixner (centre) is watched by her team while operating on 14-year-old Charlie.

You don’t get braver than Zac Bos and Charlie Harms. They are the youngest Australians to stay awake during their own brain surgeries so they could guide specialists through the complex networks inside their heads.

Charlie, 14, even takes one of the world’s leading neurosurgeons to task about who’s the best companion in Doctor Who – despite the fact she is cutting deep into his brain at the time.

Three weeks later, Zac, 13, becomes the youngest Australian to face this most delicate of all surgeries. Again the director of neurosurgery, Dr Wirginia Maixner – who successfully operated on conjoined twins Trishna and Krishna in 2009 – has to issue a mid-operation warning when he almost ruins the plot of a cartoon series they both watch. 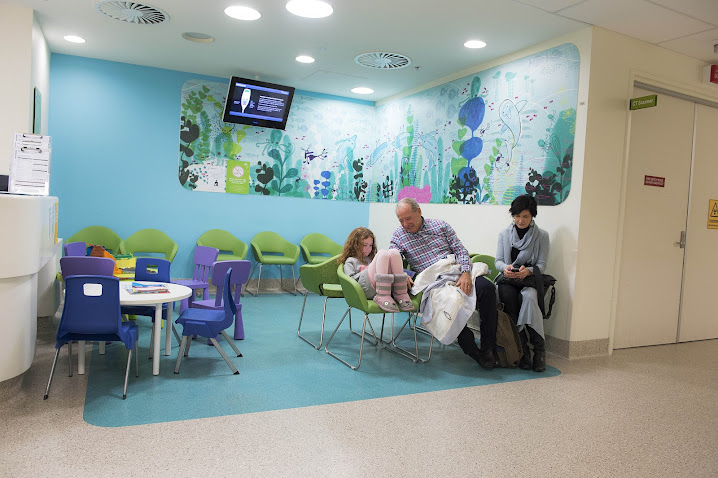 Charlie’s parents, Rod and Maria, and sister Millie wait while he has an MRI.
It’s this breathtaking mix of skills, the ability to be in their patients’ heads both physically and metaphorically at the same time, that means the team from Melbourne’s The Royal Children’s Hospital can go where others dare not.

Charlie and Zac’s cases are remarkably similar. Each has misfiring connections buried in the areas of brain responsible for speech, and attempting to remove them with conventional surgery is too risky for most hospitals.

However, after months of preparation across two states, on July 19 and then August 9, they each come to Melbourne for turns in theatre 14. 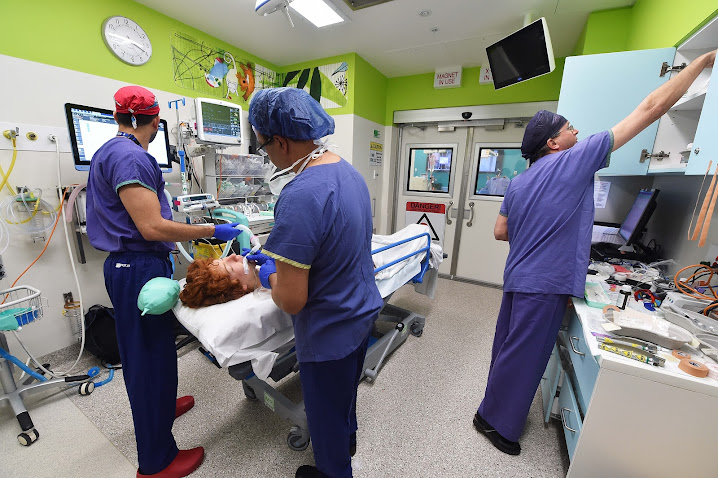 Anaesthetist Professor Andrew Davidson (right) and his team prepare Charlie for the surgery
Here the neurological team has performed 10 “awake surgeries” over the past decade, though the process has only previously been considered for patients over the age of 16.

With Charlie’s seizures increasing to the point where he violently collapses two or three times a day, he cannot go to school or even cross the street in his hometown of Yeppoon, Queensland, for fear he’ll have a seizure and be run over.

Medication needed to suppress his symptoms had risen to four times the maximum adult dose, which is simply not safe. 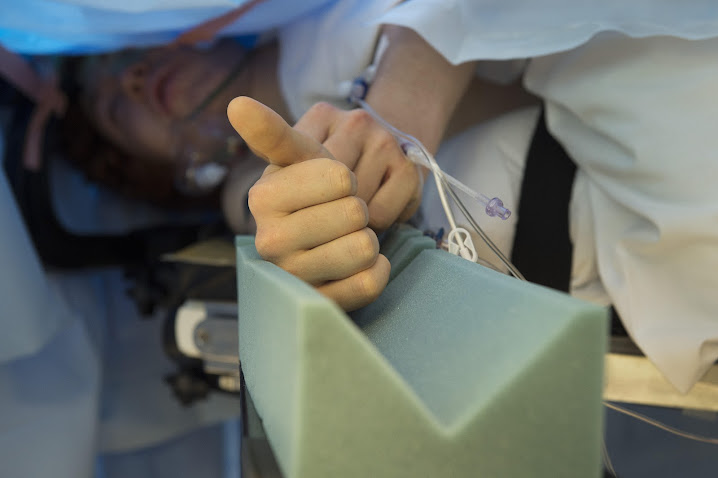 Charlie gives a thumbs up during the surgery.
“When he was seven, they said it came from this part of the brain and they could not operate,” says Charlie’s mum, Maria. “We went back to Brisbane last year [for] more scans… They said they couldn’t do it in Brisbane, but would we consider [awake] surgery? We jumped at the chance because he wasn’t having much of a life as it was. So we came down to [The Royal Children’s Hospital] and they said, ‘We want to help him. If we [can’t], we don’t think there’s anyone else who can.’”

Zac’s first tonic-clonic seizure came in 2013, when cold water shocked him in the shower at his Brisbane home, presenting like a mini stroke that rendered his body frozen. Since then, surprises as simple as a tap on the shoulder or having a drop of sweat drip have caused up to three seizures a day. 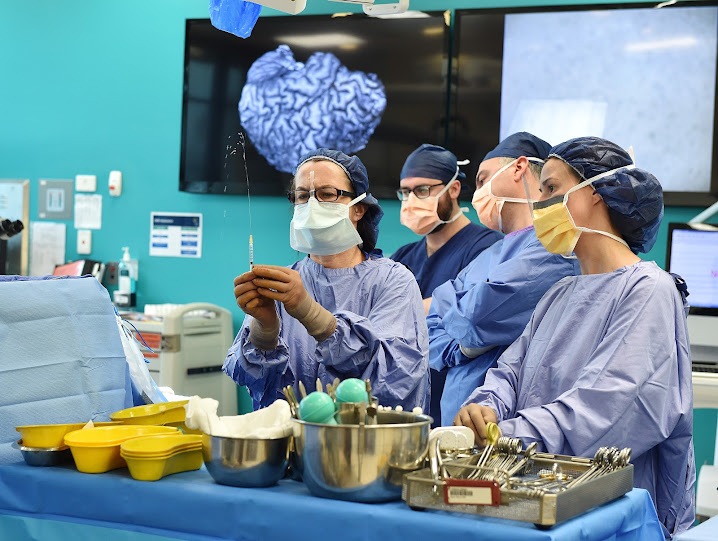 Surgeon Wirginia Maxiner (left) and scrub nurse Jessica Allenby during the operation.
For a year leading up to the surgery, neurologists used high-tech scanners to map the boys’ brains and build virtual 3D models.

From this, they can identify the two most important images. One shows parts of the patient’s brain active when they are talking – areas surgeons must not damage. The second shows the areas that are active during a seizure – parts they must remove. When viewed together the problem is obvious – good and bad sections of brain overlap, and the slightest slip could rob Charlie and Zac of their ability to speak or think. This is why the boys must be kept awake to endure what few adults could stomach.

While the images provide a rough map through Charlie and Zac’s brains, it is only by listening to them speak as each section of brain is operated on that surgeons really know whether that area is needed or can be tunnelled through.

After two huge seizures, Charlie is withdrawn and not in great form to try to remain alert as the marathon 12-hour process begins at 7am. 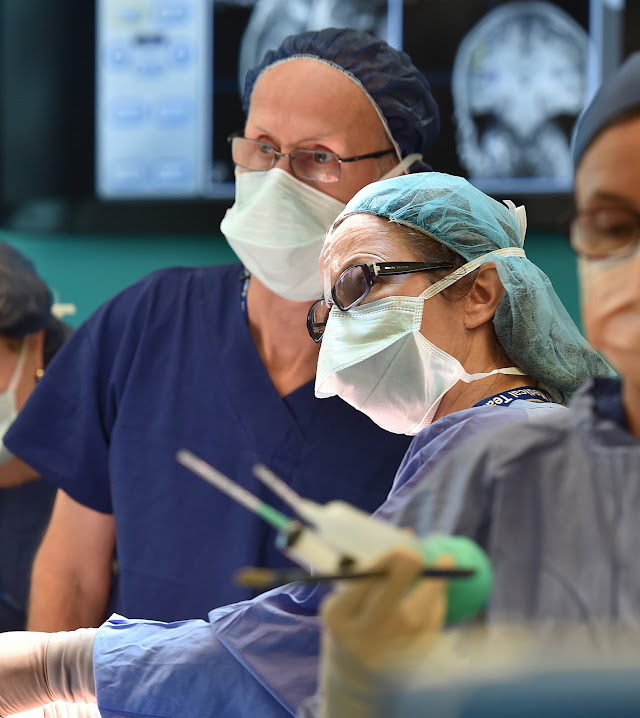 When Zac’s turn comes around, his only concern is hunger and he spends his waiting time taking family selfies.

The absence of pain sensors in the brain make it possible to operate on an awake patient, but superficial relief is needed so a hole can be cut into the boys’ skulls. Light sedation is also used to ease anxiety, however the relief comes from the team’s ability to constantly reassure and connect with the boys.

By 1pm, during both operations, sections of the boys’ skulls are removed and their brains are open to the world. Charlie asks for a message to be taken to his mum: “Tell her I’m all right.” In Zac’s case, it’s time for our photographer to make good on a promise and take a picture of Zac’s brain for his collection. Maixner cleans away any tissue for the snap, declaring, “You have a handsome brain.” 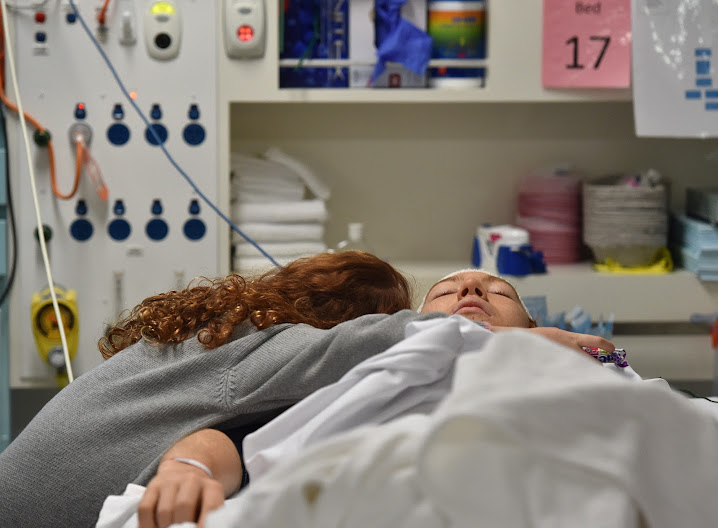 As each line is repeated, a clicking sound can be heard from inside the patient’s head, where the specialists methodically probe each section of the brain with an electrical pulse. They listen intently; if they strike an area where the patient slurs their words, sounds confused, stammers or can’t reply at all, that part is deemed vital and must be kept intact. If the patient continues talking freely, that section is non-vital and can be tunnelled through. 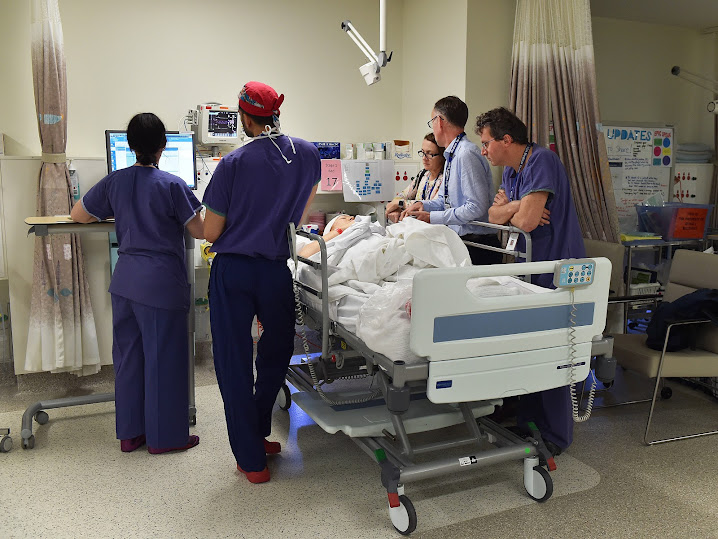 Neurosurgeon, Wirginia Maixner, neurologist Dr Simon Harvey and anaesthetist Professor Andrew Davidson speak to Charlie in recovery after his operation.
Charlie’s exhaustion prolongs the process, but the results reinforce the brain-scan findings: a finger-shaped slither of brain is clear of activity and offers a window to the seizure-causing region, 3cm below. As Charlie nods off to sleep, a microscope is placed above his head and Maixner cuts a slit the width of two fingers.

“You won’t find many neurosurgeons who [can] operate down here and do it comfortably. It’s a scary part of the brain; a difficult part to access,” says Harvey. “[They] might go there to take bad tumours out in somebody older, but here we are talking about a 14-year-old boy who has a perfectly good brain if we can stop his seizures.” 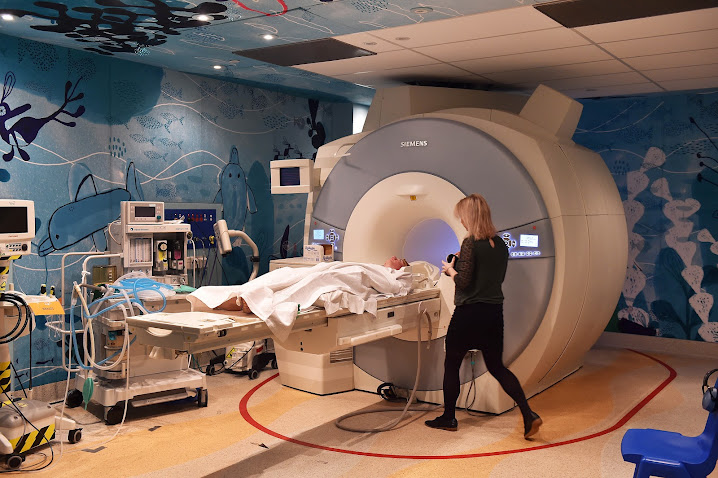 Zac about to have his MRI prior to surgery.
When Zac’s brain is probed, the whole operation is turned on its head. Areas revealed in scans as “devoid of anything” leave him struggling to speak, and the planned path is blocked. Probing another area then causes Zac to have a seizure.

Reviewing the results, two alternative routes emerge: one through an area Maixner calls “the mushroom”, another through “the funny area at the back”. 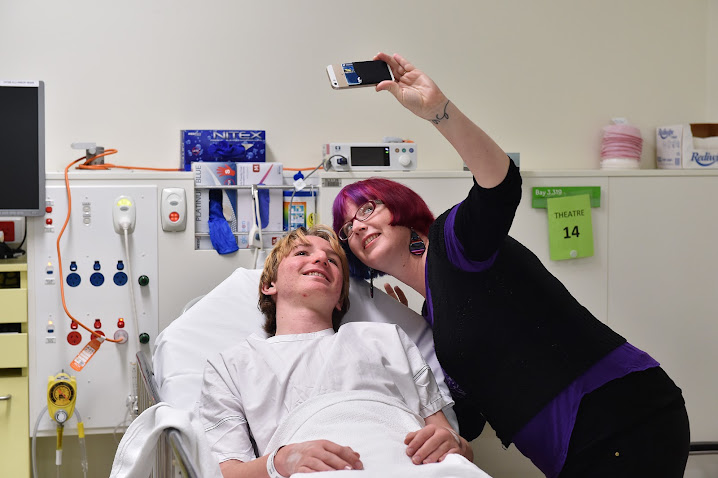 Zac and his mum Vicki distract themselves by taking photographs before his brain surgery.

As the plan firms, the probes are turned back on to induce a seizure. When it occurs, the plan is certain, and Maixner tunnels through the mushroom-shaped area so it can be removed along the way to the main problem, 3.5cm below. 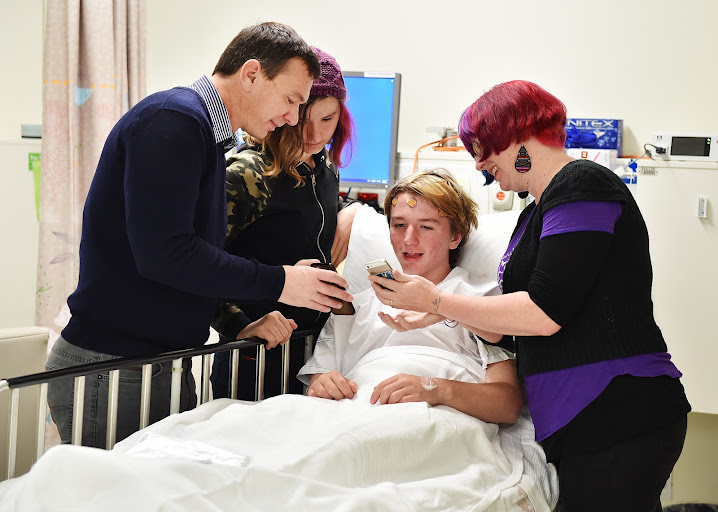 Zac is surrounded by his dad Michael, mum Vicki and sister Annika before his surgery.

While both boys suffered severe headaches and speech difficulties after their surgeries, a fortnight later the results are stunning: neither has had a seizure and both are considered cured.

A year after Brisbane specialists first got in touch with the neurologists in Melbourne to see if they could help Zac, his mother, Vicki, is overwhelmed at his transformation. 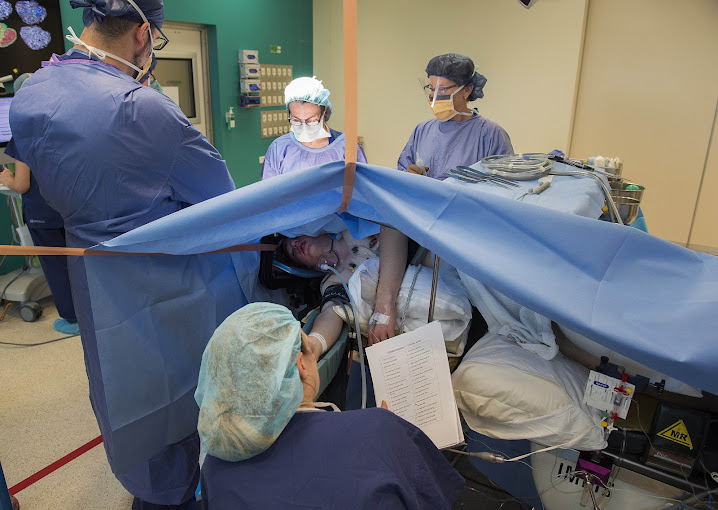 As soon as they said it was a possibility, we jumped at the chance,” she says. “Essentially, they were saying, ‘We can cure your son… we can give him a life.’ I used to worry every little thing would trigger a seizure. Now we can even come up behind him and slap him on the back and it’s fine.”

It’s the simple pleasures Zac is most looking forward to. “I’m desperate to do something which may seem quite minor to others – cannonballing into a pool,” he says. “I don’t know what the future is, I guess I’ll see what’s ahead.” 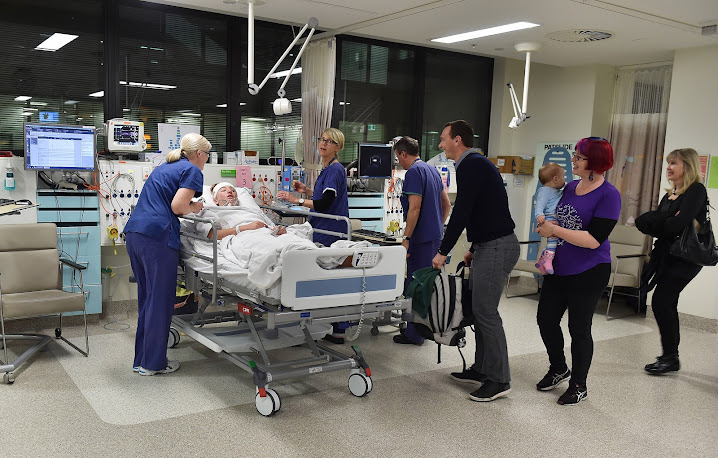 Zac’s family rush to meet him in Recovery after his surgery.

Subscribe to our newsletter here and stay up to date